Les 2 Mondes is a touring theatre company based in Montreal that creates its shows in French, but translates some of them for touring around the world. In the past, the company has translated its shows mostly in English, but also in Spanish, German, Russian and Mandarin. 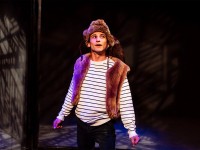 Two solitudes -a girl and a boy- enter into a curious dialogue. She speaks to her shoe or a cuckoo clock while he asks questions to a cardboard box or a mirror. The two children will gradually come out of their shells and get to know each other’s imagination. When Bach’s music remixed by composer Laurier Rajotte connects with the words of Sébastien Harrisson and the world of Michel-Maxime Legault, the result is an off-beat poetic world filled with surprises. This new 2 Mondes production for young audiences is geared for children 5 to 10.

Two-part Inventions takes its charming title from Bach’s repertoire. It features a girl and a boy left alone at night each in their own apartment. They fill their loneliness by entering into a dialogue with the lifeless objects around them.

Les 2 Mondes is one of Quebec's foremost theatre companies and has been engaging in contemporary research and creation for more than 40 years. In 2013, playwright Sébastien Harrisson took over as artistic director and focused the creative endeavours on text. His programming features two-play production cycles consisting of one play geared for young audiences and the other for the general public. This comprehensive artistic approach provides different generations of spectators and designers with an opportunity to connect and has been the company's hallmark in recent years. Through a creative process focused on research and experimenting, designers from various backgrounds come together and approach these two worlds by creating highly poetic works anchored in humanism. In the Spring of 2019, Sébastien Harrisson invited Eric Jean, the reputated director, to share the artistic direction of Les 2 Mondes. The two creators, who have collaborated numerous times before, now join their expertise to develop a partnership where playwriting and stage writing are in perfect synergy.

Les 2 Mondes has toured worldwide, often being the first Quebec company to visit some countries. Over the years, its productions have been performed in more than 35 countries, 350 cities and close to 80 international festivals, garnering it widespread praise and recognition.

The company is headquartered in Montreal's Villeray neighbourhood. It has its own research and production facility that it shares with a stable of young companies known as Théâtre Aux Écuries.

It was in the early 70’s, a period of creative collectives, that Monique Rioux, France Mercille and Daniel Meilleur joined hands and minds to create what they called La Marmaille. As its name implies, the company devoted itself to youth theatre with a creative approach that also embraced the element of audience involvement. With unique and unusual propositions such as Cé tellement “cute” des enfants (1975), the company stood out as a new force in Québec’s budding creative movement. At this same time, the company joined with Théâtre de l’Œil and le Carrousel in founding la Maison Théâtre.

By the end of the 80’s, the company was winning applause on foreign stages, and coproduced its first international work with Teatro dell’Angolo de Turin; Promised Land (Terre promise/Terra promessa) played no fewer than 580 shows just about everywhere around the world. Michel Robidoux, the company composer in the early years, moved into artistic direction in 1989.

With the creation of Leitmotiv _in 1996, the company hit a new vein of exploration: multimedia. Video artist Yves Dubé’s arrival inspired a growing place for the elements of visual and musical imagery. The company took the impetus to acquire its own production centre in order to experiment with technology and further refine its creative work. What followed was _Living Memory (2001) and 2,191 Nights (2003), as well as Carnets de voyages (Notes from the Journey Home) in 2008, a poetic adventure that looked back on the company’s long history of wandering the world.

In 2009, the company decided to share its production and performance centre with a collection of young companies gathered under the auspices of Théâtre Aux Écuries.

In 2013, Daniel Meilleur, after forty years at the helm of 2 Mondes, took a final bow and left, as did collaborators Michel Robidoux and Yves Dubé. Here the company found itself at a monumental turning point. It responded with a typically bold move, essentially reinventing itself once again by calling upon a writer to assume artistic control. Since August 2013, the company has been led by dramaturge Sébastien Harrisson.

Les 2 Mondes is a touring company and its productions are made to travel. If you wish to receive one of our show in your theater and be part of a tour, please contact our booking agent.